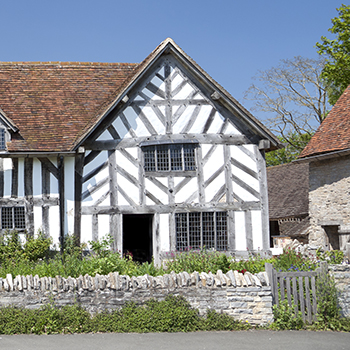 A brief look at some of the architectural periods that have inspired our collection of ironmongery.

The Gothic style first appeared in northern France and flourished in Britain during the late 12th Century. A reflection of sophistication and power, the architectural style was used for the construction of great cathedrals in places such as Lincoln, Wells and York. Perhaps the most important Gothic buildings of the time include Canterbury Cathedral and Westminster Abbey.

Above - Westminster Abbey in London.

The pointed arch, rib vaults and an abundance of stained glass are all synonymous with the era. Rib vaults and large arches were used to help support the height and weight of these grand buildings. As well as the creation of cathedrals, universities, palaces, and great houses were also built in this architectural style.

Above - University of Glasgow Cloisters.

Our collection of Gothic ironmongery is characterised by the pointed arch, a feature that is most prominent on our Gothic Lever Handles.

Tudor architecture advanced in Britain in the late 15th and early 16th century during the reign of the Tudor monarchs. Since few churches were constructed after the English Reformation, the Tudor period saw the making of the great country house. Wealthy landowners started to build on existing family estates or construct new grand manor houses such as Longleat in Wiltshire.

Above - Longleat House in Wiltshire.

The Tudor style saw flatter arches and greater decorative details such as embellished doorways and elaborate chimneys. As well as the manor house, the Tudor period is also known for its distinctive black and white architecture. Bustling market towns such as Shrewsbury and Chester saw the construction of many merchant homes.

They were built with a timber frame and overhanging upper floor. Some of the most iconic black and white Tudor architecture can be found in Stratford-upon-Avon, like the house of William Shakespeare’s mother, Mary Arden.

Above - Mary Arden's Farm near Stratford-upon-Avon.

Our range of Tudor Lever Handles were inspired by the elaborate embellishment and grandeur of this period.

A late phase of the Georgian period, Regency architecture emerged during the early 19th century when George IV was Prince Regent.

Regency houses were typically built from brick, covered in stucco (a type of render) and painted white. Terraced houses were popular in towns and crescents were especially fashionable. The Royal Crescent in Bath is a great example of Regency design.

Above - The Royal Crescent in Bath.

The Regency era was renowned for its elegance and refinement. Buildings had symmetrical façades, sash windows and ornate wrought iron balconies. Perhaps the most recognisable Regency characteristic is the use of columns. Main entrance doors were framed by two white columns, heavily influenced by Palladian architecture from ancient Greece and Rome.

Above - A Regency Terrace in London.

John Nash was the architect most known for this period and designed the terraces of Regent's Park and Regent Street in London, both fine examples of Regency style.

Our Regency range reflects the elegance of this era, taking inspiration from its classic curves and columns.

The Victorian era saw a blend of architectural styles. The Victorian terraced house is an iconic example of British architecture and was influenced by Regency design, Gothic revival and the arts and crafts movement. During the industrial revolution millions of Victorian homes were built in the towns and cities of Britain. Once exclusively a privilege of the rich, the terraced house now provided accommodation for the working class.

Above - A Victorian Terrace in Oxford.

These houses were built from newly standardised factory-made bricks and had slate roofs and bay windows. They were adorned with many decorative features that we treasure today like stained glass doorways, patterned floor tiles, ornate ceiling roses and elaborate fireplaces.

Many or our period knob sets are based closely on original Victorian designs and would have been found with an accompanying rim lock on a Victorian door.

Art Deco architecture first appeared in Paris in 1925 and soon spread to Britain and America. Architects wanted to create a modern style for the modern age and purposely disregarded influences of the past. The Art Deco style was used to construct buildings associated with this new era like airports, office buildings, department stores, luxury apartments and factories like the Hoover Building in London.

Above - The Hoover Factory Building in London.

Art Deco’s sleek and sophisticated look reflected the age of the machine and is defined by geometric shapes like the chevron and smooth, shiny materials such as chrome and glass.

Above - Inside the The Midland Hotel in Morecambe.

Our Art Deco Door Knocker and Centre Door Knob are inspired by the sharp lines and glossy textures of this period and look particularly good in polished chrome or nickel.